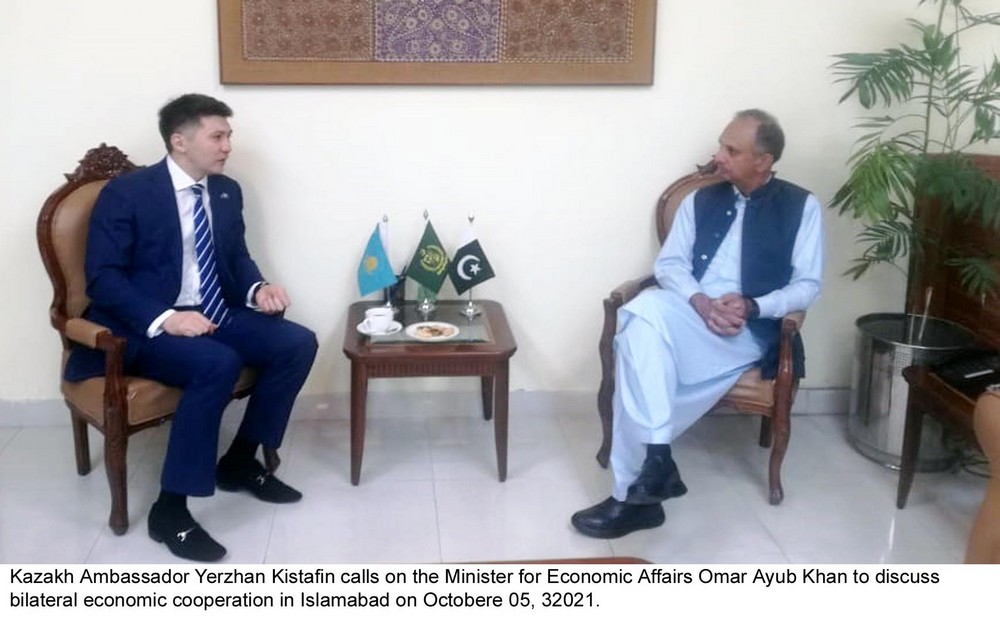 The Kazakh Ambassador H.E. Yerzhan Kistafin called on the Federal Minister for Economic Affairs Omar Ayub Khan in his office, today. Both the sides exchanged views on bilateral relations and discussed key regional issues. The Minister expressed that the friendship between the two sides is enduring and is based on the principles of mutual respect, regional peace and economic integration, said a press release received here today. The Minister for Economic Affairs expressed that regional cooperation and economic integration are effective ways to unleash the economic opportunities. He further highlighted that there is huge potential for enhancing bilateral trade & investment between the two countries. He particularly emphasized the importance of regional connectivity and Pakistan’s pivotal position in providing the shortest access between the land-locked Central Asian States and the Arabian Sea. The Minister highlighted that Pakistan would be a regional hub for transit trade and investment opportunism in the near future. He also stressed on establishing direct air linkages between the two countries. Furthermore, they also discussed the other priorities areas including agriculture, tourism and media. H.E. Yerzhan Kistafin, Ambassador of Kazakhstan in Islamabad underlined the excellent diplomatic and economic relations between the two countries. The Ambassador also highlighted the importance of regional integration and connectivity between with the Central Asia and Pakistan which would help to unleash economic opportunities in the region through enhanced trade, investment and tourism. He highlighted that presently, the level of economic cooperation is much below the potential of both countries and stressed on enhancing business-to-business contacts through private sector. The Ambassador of Kazakhstan informed that the President of the Republic of Kazakhstan has accepted the invitation to visit Pakistan next year. In order to enhance bilateral economic cooperation, he also proposed to hold the next meeting of Kaz-Pak Inter-Governmental Joint Commission on 23rd November, 2021 in Almaty. He apprised that three working groups on economic cooperation, energy and transportation have already been established to prepare the proposals for upcoming Kaz-Pak Inter-Governmental Joint Commission. The Minister for Economic Affairs thanked Kazakh Ambassador for his pivotal role in strengthening diplomatic and economic relations. The Minister reiterated strong commitment of the Government of Pakistan towards further expanding bilateral economic cooperation through enhanced trade, investment, tourism and business2business contacts.